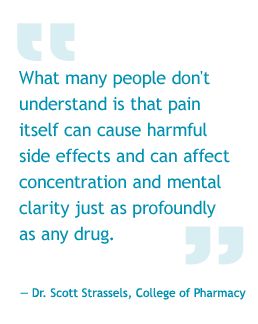 Just another short and sweet, easy to print explanation of what even minor long-term untreated chronic pain can do to a person. A person without any other troubles or illnesses. Most of the issues discussed in this article are less life-ending types of chronic pain, but that just serves to further reinforce the point that any kind of pain if left untreated is unhealthy; it can trigger long-term issues with depression and anxiety, even rewire the brain, and can make it difficult to process even mildly disruptive daily events, such as bad traffic.

That is not nothing.

So many of us are in kinds of pain that are so far beyond this little pamphlet from a pain clinic, but the people around us often are not as aware of the little things that go awry when pain stays for too long and is not recognized and treated. I thought this was kind of a nice review for people who are new to thinking about or dealing with illnesses that involve never-ending agony.

Sorry, ignore me, I’m still not able to get this flare up under control, and it’s starting to scare me when I read about others who had their “Big One” in the onset years of their illness that lasted 6-12 months.

Even a good day is a fight for every positive thought; every scrap of willpower woven together so tightly just to do normal people tasks, inside my own home. On a good day.

Even minor pain, such as a stubbed toe or a paper cut, is unpleasant but that pain fades relatively quickly. Imagine being in pain that never fades, or that fades only to come back a few hours later. What would that do to a person? This is what people with chronic pain have to deal with every day.

Chronic pain, a diagnosis including arthritis, back pain, and recurring migraines, can have a profound effect on a person’s day to day life when it goes untreated. People dealing with ongoing or long-term pain can become irritable, short-tempered, and impatient, and with good reason. Constant pain raises the focus threshold for basic functioning, which leaves the pained person with a greatly reduced ability to find solutions or workarounds to even relatively mundane problems. Something like a traffic jam, which most people would be mildly annoyed by but ultimately take in stride, could seriously throw off the rhythm of someone who is putting forth so much effort just to get through the day.

After a while, pain wears a person down, draining their energy and sapping their motivation. They sometimes attempt to limit social contact in an effort to reduce stress and to decrease the amount of energy they have to spend reacting to their environment. Eventually, many people with chronic pain develop depression-like symptoms: lack of interpersonal interaction, difficulty concentrating on simple tasks, and the desire to simplify their life as much as possible, which often manifests as seeking isolation and quiet. Sleeping often makes the pain less intrusive, and that combined with the exhaustion that pain induces means that it isn’t uncommon for a person to start sleeping upwards of ten hours a day.

Some recent studies have also shown that chronic pain can actually affect a person’s brain chemistry and even change the wiring of the nervous system. Cells in the spinal cord and brain of a person with chronic pain, especially in the section of the brain that processes emotion, deteriorate more quickly than normal, exacerbating many of the depression-like symptoms. It becomes physically more difficult for people with chronic pain to process multiple things at once and react to ongoing changes in their environment, limiting their ability to focus even more. Sleep also becomes difficult, because the section of the brain that regulates sense-data also regulates the sleep cycle. This regulator becomes smaller from reacting to the pain, making falling asleep more difficult for people with chronic pain.

Untreated pain creates a downward spiral of chronic pain symptoms, so it is always best to treat pain early and avoid chronic pain. This is why multidisciplinary pain clinics should be involved for accurate diagnosis and effective intervention early in the course of a painful illness – as soon as the primary care provider runs out of options that they can do themselves such as physical therapy or medications. However, even if the effects of chronic pain have set in, effective interdisciplinary treatment may significantly reduce the consequences of pain in their lives. There are any number of common treatments, which include exercise, physical therapy, a balanced diet, and prescription pain medication. Ultimately, effective treatment depends on the individual person and the specific source of the pain. One thing is very clear, however: the earlier a person begins effective treatment, the less the pain will affect their day-to-day life.In addition to making some symptoms more profound, the change in brain chemistry can, create new ones, as well. The most pronounced of these are anxiety and depression. After enough recurring pain, the brain rewires itself to anticipate future bouts, which makes patients constantly wary and causes significant anxiety related to pain. Because chronic pain often mimics depression by altering how a person’s brain reacts to discomfort and pain, chronic pain often biologically creates a feeling of hopelessness and makes it more difficult to process future pain in a healthy way. In fact, roughly one third of patients with chronic pain develop depression at some point during their lifetime.

via The Long-Term Effects of Untreated Chronic Pain – Integrative Pain Center of Arizona.

Personally I think that depression statistic should be a lot higher… severe chronic pain almost always manifests some form of depression/anxiety/ptsd, although of course there will always be exceptions.

The number would certainly be higher if stigma against mental illnesses were lessened and people felt free to come to their healthcare practitioners with issues relating to depression without fear of being told to take a pill and get over it, or worse; threat of hospitalization.

Many of us have run the wheel before and we don’t need people mistaking our pain for what it is not, so we keep it mostly inward unless we find someone who really understands the myriad issues surrounding chronic pain, disability, and illness. Bottling it up wouldn’t be such a frequent reaction to stress, depression, and anxiety if we lived with a different cultural attitude toward mental and invisible illnesses.

Wishing everyone a low pain day, with extra energy. ❤

Thank you for sharing!

sign up for Ebates for FREE and get cash back on all your online purchases!

Click the picture below to sign up to get free cash back on almost any online purchase with this easy app that deposits right into your paypal account or sends you a check each month! I appreciate your support so much.

Help me afford to adapt my life around my illnesses by starting your own Free 30-day trial of Audible or click the link and complete any regular shopping on Amazon once you're there.
I make $5 when you start your free 30-day Audible trial and 4-6% of every purchase made on Amazon within 24 hours of using this link.
THANK YOU FOR YOUR SUPPORT!

I BLOG FOR MENTAL HEALTH

Looking for Something Specific?

“Disability doesn’t make you exceptional, but questioning what you think you know about it does.” – Stella Young The danger of being viewed through the lense of the “inspiring cripple” archetype is that it was created by ableists as a tool used to invalidate those who are struggling. It means that people expect things from you that you […]

Be brave, little fighter. There's a warrior within you.

Because All Women are Princesses & are Stronger Than We Ever Knew

artworkbykali
No More Silence. Speak Out Against Domestic Violence.

Living with a chronic illness: the ins and outs